Today  I want to pay homage, with all due respect to the badass plants that harass us, reminding us that nature is not ours to own, use or abuse.

If it weren’t bad enough having to worry (and pay for) a sick dog because of a tiny arachnid bite, a walk in the woods is rife with every type of threat you can imagine. Are we so unadapted to life outdoors that a single mile can result in a turn in the road, a divergence from our plans, a knowledge of the evil as well as the good.

By evil, I mean something that takes from our quality of life. A plant can be evil, sure. But because there are many more wonderful, “good” plants, we tend to ignore or bask in innocence when it comes to the “poisoned apple.” 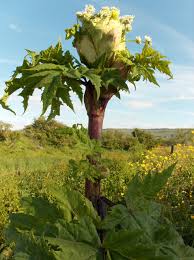 Take the Giant Hogweed. Being a musical aficionado, the young girl me found this information to be very interesting. Of course, I was living in a small room in a small house in a small neighborhood in a small borough. Back in Brooklyn, anything that could take me, transport me, was welcomed. It blocked the reality that I had very little opportunity to partake of the greater world at the time of its rise. Phil Collins, of all things. Genesis. An album called “Nursery Cryme.” I have no idea how this came to my attention, but have always remembered snippets of the lyrics, the tune, the interesting turn of instrumentals.

This is the advantage of looking back. However, looking forward, be aware. Things have a way of returning. We live in circles within circles. The low-hanging fruit, the poisoned apple, simply awaits our picking it up and responding the the mushroom’s command – “eat me.”

There is so much out there, but it simply reflects what’s inside.

“The Return of the Giant Hogweed” warns of the spread of the toxic plant Heracleum mantegazzianum after it was “captured” in Russia and brought to England by a Victorian explorer.[14] “The Return of the Giant Hogweed” features Hackett’s first use of guitar tapping, a technique whereby the guitar fret board is played like a keyboard.[15] The technique did not attract mainstream attention until Eddie Van Halen demonstrated it in his instrumental “Eruption” in 1978, but Hackett is generally credited as the first guitarist to use two-handed tapping.[16]