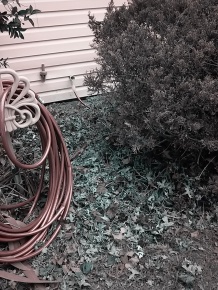 Today as  a true resistance activity, Jim and I took to the back of the front hedge to install a new hose and clean out the ivy that has grown so rampantly that it had tied down the old hose that was there for many years.

Last year, I had given up on using that hose, as it weighed so much, and my tired arms were having so much trouble tucking it in in a nice coiled manner. So, off with the old, on with the new. Jim had gotten a new hose, unfortunately, contractors’ grade, which means it is heavy no doubt, but it is clean, shiny, and ready to take up residence on its stand.

But we had a problem. There is so much ivy back there, behind my sand cherries and junipers and pieris, that we decided to do a clean-up while we were at it. Now I have a

weed on my hands, not a pretty shiny ground cover which, after all, is invasive and therefore not ideal for my Resistance Garden. Even though the faucet/spigot is clean and available now, we have peeled out the ivy as much as we could, and replaced it with either air, or in my case, some vinca.

Vinca is a better ground cover and will perform. Vinca will offer a spreading habit, but not a woody tangle. It tends to stay on the ground, not climb up shrubbery or under the siding, as ivy does. In this way, we have created an accessible area to find water in the entire front yard.

So we have taken something that was obtrusive, ugly, indestructible, and replaced it with clean, neat vinca in an area where neither will be noticed behind or under the now dense shrubbery. With such a replacement we have improved the conditions of our hedges, and made it possible to enjoy the benefits of water, clean ground, and maintenance ease.

Wish it were so easy with politics. Here in my Resistance Garden, nobody benefits more than anyone else. Everyone has equal access to the joy of watching the hedge and the groundcovers go through their yearly cycles. There is a healthy interchange of birds, bugs and even our cats that is interesting to watch. And nobody gets sick, nobody dies just from taking a peek at the faucet once in a while.

Yes, the ivy will grow back, as pests do. But a good whacking and pruning, peeling and planting does wonders for the health of the Resistance Garden and us, its caretakers.