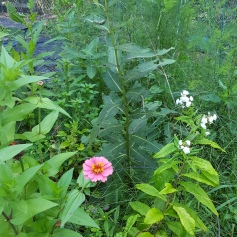 September rolls around, and the tiny garden is in full swing. As things blossomed and became, there was a triumph and a tragedy.

The good news is that the milkweed became a host plant for some Monarch larvae, who were pretty big when I first saw them, and I cleared away most of the mint to give the perennials some breathing room finally.

Then tragedy struck!!! The onion/asparagus/mint medley next door was slated for a razing without my knowledge. Indeed, as a newer person, I should be given some leeway as I feel my way around the season and the conditions in my patch.

But, one fine day I discovered the onions were gone, but so were most of the milkweed and half of my tiny hosts, the stiletto! I immediately contacted the beleaguered leader and it happened the henchman was standing nearby while I almost cried about this disaster. Imagine! A named cultivar under attack!

Turned out it was just a slip of the wrist. The week whacked did a number and I was the week whacked this time. It was “unintentional” an “accident.” I let my pique fizzle and went on with my life, but as of the end of September, things are still in a sort of shocky situation. But I’m hoping for the best, and I wish that were my worst problem. I would sleep even better at night!